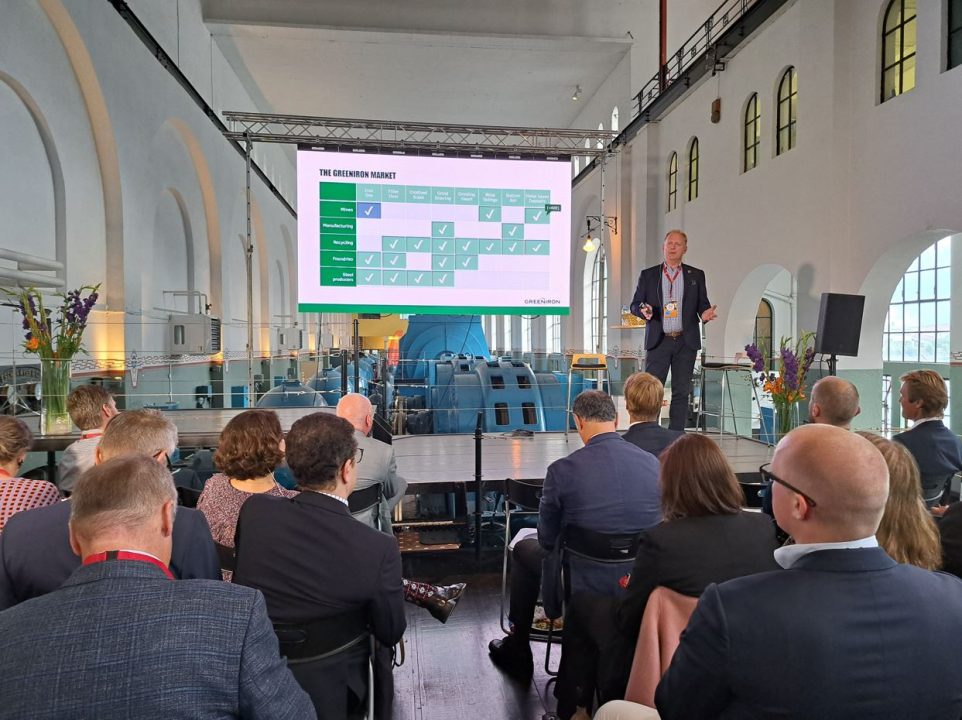 In the past few days, GreenIron’s CEO, Edward Murray presented the company’s hydrogen-based technology for the reduction of iron, steel and non-ferrous metals at the “H2Symposium 2022”, in front of a group of hydrogen-interested industrialists, researchers and politicians, led by Norway’s Minister of Energy, Jan Christian Vestre. All participants had a clear target of a non-carbon-based circular economy.

The conference was held in Europe’s once largest power plant, in the scenic mill town of Tyssedal, at the foot of Hardangervidda. It seems quite obvious that Norway is well on its way to occupying the top position as the world’s leading green hydrogen economy, which was clearly reflected in the audience’s great interest in our 100 percent carbon dioxide-free process.

Some of Norway’s largest industrial companies are working hard to replace fossil raw materials with green hydrogen and the number of significant hydrogen projects is now approaching 50. One of several pioneering technologies that was presented is the energy company TechnipFMC behind. The project is about hydrogen storage at the bottom of the sea with the appropriate name Deep Purple.

GreenIron’s team has recently been expanded with Maciej Kaplan, our new Process Engineer. Master’s degree in materials science and with a doctoral thesis in materials physics in the bag. Besides...

These days we have passed a milestone

Now we can proudly announce that @GreenIron has contributed to a world-unique technology shift within our emission-intensive industry. The other day we supplied fossil-free iron to the casting of a...

GreenIron – appointed as one of Sweden’s most prominent, innovation and young technology companies

Today is a big day for us, when it is now official that GreenIron is on the Swedish magazine Ny Teknik’s prestigious “33 list”. A compilation the magazine has presented...

This week’s three leaf clover in strategic alliances is now complete as we can today announce a collaboration with @H2 Green Steel. A week we at @GreenIron will likely remember...

For the second day in a row, we can proudly announce yet another strategic collaboration for @GreenIron. This time with @SECO/WARWICK Group, a world leading manufacturer of heat treatment equipment,...

Today we begin a close collaboration with Statkraft – Europe’s leading supplier of renewable energy to the power-intensive industry… It is great to have the long-term production, delivery and storage...

Tanja Ilic gets the important role of GreenIron’s CCO

It´s with great satisfaction that we can announce that @GreenIron’s ever-growing team is now being expanded with @Tanja Ilic. As our CCO, Tanja takes on a very important role, with...

In the past few days, GreenIron’s CEO, Edward Murray presented the company’s hydrogen-based technology for the reduction of iron, steel and non-ferrous metals at the “H2Symposium 2022”, in front of a group...

An analysis of the properties of GreenIron’s fossil-free iron

In recent days, we have passed another of many milestones towards creating a fossil-free value chain – from the extraction of ore to the production of cast iron, steel and...

We visit the “EIT RawMaterials Summit 2022” in Berlin

Today, our CEO – Edward Murray – has presented Greeniron at the “EIT RawMaterials Summit 2022” in Berlin. A highly relevant context for us to be seen in, organized by...

Edward Murray (CEO) has today presented GreenIron, in front of an engaged and curious audience during AISTech 2022, in the historically powerful steel city of Pittsburgh

AISTech 2022 is a well-reputed conference that for almost 20 years has gathered thousands of visitors from all the world’s mining and steel industries. The title of the presentation was...